The Bloomsburg University Forensics Team won the 1st Place Team Sweepstakes Trophy out of six schools at the Collegiate Forensic Association's annual Fall Speech and Debate Tournament hosted by the University of Lynchburg on November 5-6, 2021.  Thirteen out of fifteen BU students won 50 individual and team speaking awards, including first place awards in 9 of the 13 events at the tournament.  Isaac Osborn, Lindsey Garnel, and Emme Reiser competed at their final tournament for the team in Lynchburg as they either graduate in December or have an internship in the Spring.

The following students won individual/team speech and debate awards at the University of Lynchburg:

Jonathan Roe had five first-place finishes. Roe was first in Persuasion; Dramatic Duo with Nick Sorkine; Lincoln-Douglas Debate; Parliamentary Debate with Isaac Osborn; and Pentathlon. He was second in Impromptu; second in Best Speaker in Parliamentary Debate (tie); third in Declamation; and fifth in After-Dinner Speaking.

Lindsey Garnel was first in Impromptu; second in After-Dinner Speaking; second in Dramatic Duo with Emme Reiser; third in Poetry; fourth in Extemporaneous Speaking; fifth in Persuasive Speaking; and second in Pentathlon.

Natalia Warfel was fifth in Prose; sixth in Poetry; sixth in Dramatic Duo with Eric Nock; and sixth in Declamation.

Erik Weibel was third in Prose and fifth in Impromptu.

Jared Garrison was second in Extemporaneous Speaking; fourth in Impromptu; and fifth in Informative.

Eric Nock was third in Prose; fourth in Informative; and sixth in Dramatic Duo with Natalia Warfel.

Luis Donayre was third in Informative; and sixth in Lincoln-Douglas Debate.

Nick Sorkine was first in Dramatic Duo with Jonathan Roe; first in Extemporaneous Speaking; second in Persuasion; fourth in Lincoln-Douglas Debate as well and Pentathlon; fourth in Best Speaker in Parliamentary Debate; and sixth in Prose.

Jacob Geedey was sixth in Informative; and sixth in Impromptu.

Dr. Neil Strine, Director of Forensics judged for Bloomsburg University at the tournament.  The team will travel next to Ottawa, Ontario for the Collegiate Forensic Association's annual Winter Tournament in January, 2022. 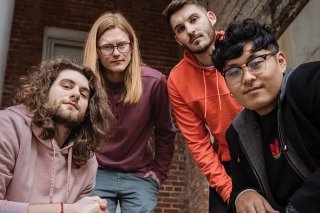 It can pay to sing in the shower. Philadelphia indie-pop band Moonroof owes its start to Dave Kim ’16 singing in the shower of Luzerne Hall in September of his freshmen year. The sound attracted the... 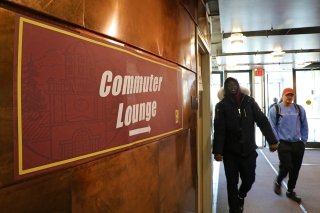 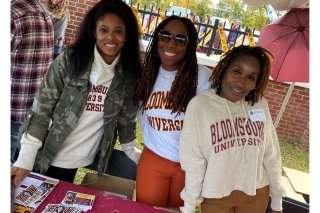 Kimberly Abney ’09 described herself as a “reluctant student” when she came to BU. Today, she serves as an example and support for both students and fellow alumni.