As a teenager in his hometown of Williamsport, Kerby Confer would lie awake at night listening through the crackle and hiss of faraway stations on his transistor radio, hoping one day to be that voice on the other end of the mic. “I was dreaming I would be on the air, and with no idea and no money for college. Just my grandmother’s intuition and encouragement that I could do whatever I thought I could do.”

Sixty-five years later, Confer, a legend in the radio industry, is focusing his creative energy to create a new legacy with a $5.3 million gift to the BU Foundation designed to support and inspire the next generation of students to become professionals in the broadcasting industry.

A portion of the gift will create a state-of-the-art media center for students aspiring to achieve success in the fields of radio, video, podcasts, live-streaming, and other forms of broadcasting. In recognition of the impact this gift will have on the university, BU will name the new facility the Kerby Confer Media Center.

The Confer Media Center, to be located in the soon-to-be renovated McCormick Center for Human Services, will include a fully renovated radio station, TV studio, newsroom, and interactive collaboration space where students and faculty can actively share ideas and experiences.

The media and journalism program, having more than doubled in size and scope since its inception, is one of Bloomsburg’s largest majors and has outgrown its current space. This gift will also fund new scholarships to help recruit and retain students across the region interested in pursuing careers in the media and journalism industry.

“This is an extraordinary gift from Kerby that will help us provide access to value-added experiential learning opportunities for all students,” says BU President Bashar Hanna. “We talk about what helps BU stand out to prospective students in terms of preparing them for success after graduation, and this is an amazing example of what that looks like as we move forward. I can’t thank Kerby enough for his commitment to helping us bring that vision to life.”

“In my day, the way that you got into radio was you either got a college education and some credentials, or you just hung around trying to be noticed,” says Confer of his youth. “I started hanging around a new radio station that wasn’t even on the air yet and did what you did in those days to get a job. And that was to keep hanging around until they said, ‘Kid, get lost or empty the wastebaskets.’ And I did for a year until they went live, and they gave me a minimum wage job for a buck an hour.”

Confer’s time listening to the radio was well-spent. On air, his talent found larger and larger audiences, moving into progressively larger markets, including Harrisburg, Scranton, Wilkes-Barre, and Syracuse.

By his twenties, he was on the airwaves in the Baltimore-Washington markets for WCAO Radio and WBAL-TV in Baltimore and WDCA-TV in Washington, D.C. His was the first integrated TV dance show in America, which inspired movie and Broadway productions of “Hairspray,” and hosted major stars including the Beatles, the Rolling Stones, Stevie Wonder, the Supremes, and James Brown.

The secret to Confer’s success is his deep understanding of how personal radio is. “It’s the original social media. There’s real-time interaction with the audience. Radio is my real-life connection to what Flip Wilson called ‘the church of what’s happening now.’”

He also became a master of branding. “I started realizing that graphic branding and call letters were important. There were some radio stations that for some reason, people remember better.”

“In 1978 in Little Rock, Arkansas, I took over a bankrupt station. The area never had a country format on the FM dial. The call letters, KSSN, spelled kissing. I married it up to a lipstick imprint and to introduce the station had bumper stickers made, ‘I’m KSSN in my car’ with the lipstick imprint. We went from a 0 to 22 share in the first year.”

He repeated the success at numerous stations around the country, including WBVR, The Beaver, in Bowling Green, Ky., and WFRG, 96 Frog, in Utica, N.Y.

In the mid-80s, a two-week African safari with his new wife and stepson would lead Confer to take his radio branding strategy to an even higher level. The Confer family was partnered with Steve and Kathy Kirk.

Steve was head of audio-animatronics and Kathy head Imagineer for Walt Disney. “I’m a Disney-phile. I’d been collecting original cels from animated movies for about five years at that point,” says Confer, who shared stories of his radio career. The Kirk’s loved the Beaver station concept, but Kathy asked, “what’s the mnemonic device?” and told Confer to close his eyes while she did a Mickey Mouse voice to demonstrate.

The problem was the Beaver had no mnemonic device. So Confer came up with the idea of a talking Frog. And then she asked, “what are the names of the cast members? It’s a theme park on the radio, the DJ names are the cast members. For example, Tad Pole and Polly Wog.”

“It was a life-changing and career changing experience for me,” says Confer. “They are our best friends. This summer we will go on our 35th trip with them.”

With radio providing so many life-changing opportunities for Confer, he had a vision of helping a new generation of students access the same opportunities.

“From becoming an on-air personality to selling advertisements, I had to learn it all,” says Confer. “What hasn’t changed today is these students will still have to learn all those things to be successful. What has changed is we can make it easier for them to do that by giving them a head start. That’s what I want to provide.”

“And that’s what started me, eight years ago, thinking if there’s any legacy I’m capable of leaving, it’s going to be to create a radio talent institute and bring all the best of my people and the crème de la crème of the other broadcasters, primarily in the northeast. Basically, open doors for these students.”

Since making his first gift to BU in 2013 to establish the Confer Radio Talent Institute, Confer has grown his support each year, continually increasing access to professional experiences for students entering the radio and broadcasting industry. He has made gifts to create scholarships, fund a faculty fellowship, upgrade equipment, and rebrand BU’s student radio station – personally purchasing the new station call letters of WHSK-Home of the Huskies. His latest gift brings his total contributions to more than $6.1 million.

“The evolution of Kerby’s involvement here at BU and his commitment to engaging with our students has been immensely valuable to their education,” says James Brown, BU’s Dean of the College of Liberal Arts. “For him to take that commitment to an even higher level and provide this type of professional setting in which our students will learn and grow shows how dedicated he is to their success.”

“Nothing would have happened without the intuition of Dr. Jim Brown, who was the driving force to bring the institute to Bloomsburg, for which I will be forever grateful,” says Confer.

“Then Dr. Hanna came along and had a vision. Maybe we could be the Northcentral Pennsylvania hub for media. I looked around and said, nobody has such a thing. Wow. The very first moment I saw the plan, I said yes.” “I’m extremely excited. The geographic location and the integration of Bloomsburg University with Lock Haven and Mansfield. These are the areas where my daughter and I grew up, and these are the areas that we know and love and cherish.”

“As the Beatles wrote and sang, it’s been ‘a long and winding road.’ We’ve got a lot of road ahead of us.” 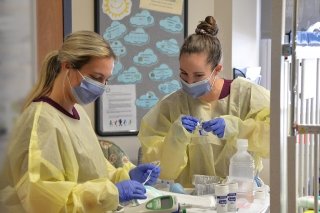 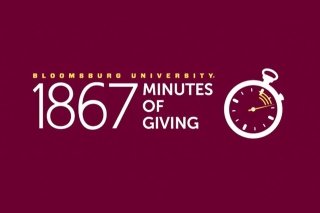 BLOOMSBURG – More than 600 Bloomsburg University alumni and supporters came together to help raise $87,408 in support for BU students during its inaugural 1867 Minutes of Giving Challenge. The money...