Speaker challenges audience to think differently about gender, race, and the courts

Members of the BU community were recently challenged to think differently about “Gender, Race, and the Court System” in a lecture.

Dr. Shauntey James, assistant professor of criminal justice at Penn State Harrisburg, invited the audience to discuss and think critically about the complicated narrative of sentencing and how we perceive others based on their status through a series of exercises.

The first thought exercise challenged the audience to consider the power of the master status. “The master status becomes the dominant identifier of a person. It becomes the focal point we see when we look at them,” said James, who earned her J.D. in 2014 from Thomas Cooley Law School.

James introduced the following scenario to the audience. “Imagine you and I are standing just outside of here in the hallway talking with our friend Sarah who has a Ph.D. and J.D. After a while, Sarah excuses herself and when she leaves, I tell you that she has been struggling to find a job because she just got out of county prison,” said James. “Does this new piece of information become Sarah’s master status?”

The audience had mixed reactions to James’ question. Some argued that no, knowing that their friend had just been released from prison would not alter their perceptions of her and others admitted that looking past this new status would be difficult.

In the second exercise, James showed the audience a series of photographs of women being taken to the courtroom and asked the audience to share how each picture made them feel. Some noted that the way that the women presented themselves influenced how they felt towards each picture. When asked, everyone agreed that they had noticed the woman first and not the law enforcement with her.

The third and fourth exercises required the audience to pretend that they were a judge preparing to hand a sentence to a female offender. “What would you do if just as you were about to give out the sentence, someone came up behind you and told you that the woman in front of you had a child of which she was the primary caregiver?” asked James. “Does the number of children the woman has change how or what you would decide about her sentence?”

As the audience struggled to reach an agreement, James decided to offer an alternative to complicate the discussion: house arrest. Overall, everyone agreed that this was the better option for the woman in the scenario until James posed another question. “What if, before you’re about to sentence this woman to house arrest, someone tells you that this person is in an abusive relationship? If you sentence her to house arrest, you have legally tethered her to her abuser.”

Female offenders are more likely to have experienced trauma and abuse; however, this only amounts to about 7-8% of the population of female offenders, explained James. Then, she posed her last exercise to the audience: “Can we justify changing the system for a small population? Is it worth the money required to do so?” 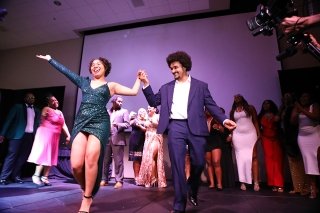 It's one step closer to the big stage for these Class of 2022 members as they were recently honored during the First World Graduation Ceremony by Bloomsburg University’s Office of Multicultural...

Kimberly Abney ’09 described herself as a “reluctant student” when she came to BU. Today, she serves as an example and support for both students and fellow alumni.