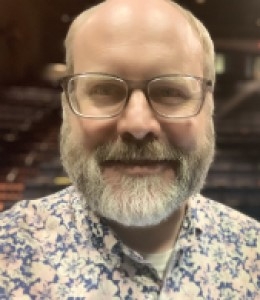 David A. Miller is a professional director, playwright, actor, and educator. David joined the faculty at Bloomsburg University in the fall of 2012 and teaches all levels of acting, directing, and playwriting, as well as the career seminar courses. He also directs mainstage productions. David most recently directed Everybody by Branden Jacobs-Jenkins. He is the Artistic Director of Plays in Bloom: A New Play Development Program at Bloomsburg University. He is an affiliated artist with Bloomsburg Theatre Ensemble.

David is a Resident Director for Amphibian Stage in Fort Worth, TX. His Amphibian productions include The Nosemaker's Apprentice: Chronicles of a Medieval Plastic Surgeon, Wittenberg by David Davalos (Outstanding Direction and Outstanding Performance by an Ensemble, Dallas Fort Worth Critics Forum), Gutenberg! The Musical! (Best Production of the Year, Reader's Choice, Fort Worth Weekly), Below the Belt by Richard Dresser (Outstanding Direction, Dallas-Fort Worth Critics Forum), and readings of Mystery of Irma Vep. All This Intimacy, and On the Ceiling.

As a playwright, David’s plays include As Long as the Window is Closed (Masterpiece Monologues, Stage Left Theater, Spokane, WA) Semi-Permanent (Elephant Ears Reading Series, Philadelphia, PA), Restoration/Conservation (Published in The Paragon Journal, Semi-finalist for The 15th Annual 10 by 10 in the Triangle Festival of New Short Plays at The Arts Center Stage, Carrboro, NC), The Flames (The Collective's C10:Comedy, New York, NY), and Mystic in the Savage State (Workshop, Strange Sun Theater, New York, NY). He is a member of Stillwater Writers (NYC), and the Dramatists Guild.

David has taught, directed, and mentored students throughout New York City at Wagner College, Playwrights Horizons Theatre School (NYU), Manhattan College, City College and Kingsborough Community College, among others. He has worked extensively in theatre education for young people as a teaching artist in the classroom and in leadership roles such as Director of Educational Outreach for Seattle Children’s Theatre and as Director of Education at Roundabout Theatre Company.

David is a former Theatre Mentor for the Richard and Mica Hadar Foundation, a Drama League Directing Alumni, and was awarded an SSDC Directing Observership. He has a BA in Theatre (Acting and Directing) from Western Washington University and an MFA in Directing from Mason Gross School of the Arts at Rutgers University.