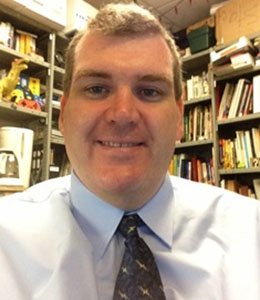 Ethan Krupp has been part of the theatre and dance faculty since Fall 2006. He serves as the Director of Theatre, the Technical Director, and also as a lighting, scenery, properties, and sound designer. He teaches Fundamentals of Theatre Design, Theatre Production/Stagecraft, Scene Design, Lighting Design and Theory, and Seminar In Technical Theatre & Design.

His professional design work has been seen at the Bloomsburg Theatre Ensemble and Electric Theatre Company (Scranton) in Pennsylvania, as well as more than a dozen other theatres in Maryland, Texas, Montana, and Virginia. Before coming to Bloomsburg, he was the Technical Director and designer for the University of Houston-Downtown, as well as a theatre faculty member for 6 years.

He holds a BA in Journalism and Mass Communications from Washington & Lee University (1997) and a MFA in Theatre Design and Technology (Lighting and Scenic Design emphasis) from University of Montana (2000).

He has been involved in theatre since junior high school when his love of Neil Simon's plays was created by extensive scene work in Adele Mallin's 8th Grade Drama Class. He continued his theatre work in high school under the direction of Barbara Goodwin onstage and Ronald Masters in the scene shop in the LA suburb of Eagle Rock, CA. After a short and misguided stint in print journalism in college, he returned to the theatre.