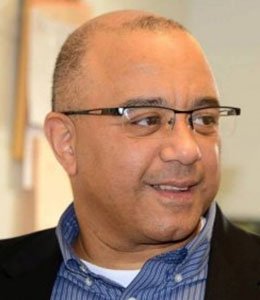 Jerry Wemple received his MFA from University of Massachusetts-Amherst and is the author of three collections of poetry: You Can See It from Here, selected by Pulitzer Prize-winner Yusef Komunyakaa for the Naomi Long Madgett Poetry Award, The Civil War in Baltimore, and most recently The Artemas Poems. He is co-editor of the anthology Common Wealth: Contemporary Poets on Pennsylvania. His poetry and creative nonfiction work appear in numerous journals and anthologies, and have been published internationally in Ireland, Chile, Spain, Germany, and Canada. Wemple is the recipient of several awards for writing and teaching including a Fellowship in Literature from the Pennsylvania Council on the Arts and the Word Journal chapbook prize. He received the Dean’s Salute to Excellence for his teaching and scholarship at Bloomsburg, the Bloomsburg University Institute for Culture and Society Award for Outstanding Creative Work, and the Jack and Helen Evans Endowed Faculty Fellowship.

Primary interests include poetry and creative nonfiction, as well as literature about Pennsylvania and African American literature. Professor Wemple is also the director of the Visual and Performing Arts Learning Community.

May — Wemple, MFA, had two recent publications. Wemple’s poem “Bridge” appears in the current issue of “cahoodaloodaling,” a quarterly literary journal. His essay “Funny,” about growing up in rural Pennsylvania, was recently published in “Full Grown People.” Wemple is the author of three poetry collections. His poems and essays have appeared in numerous journals and anthologies.

January — Wemple, MFA, recently had a poem entitled Rock and Roll published in Heart, a Pittsburgh based literary journal focused on issues of social justice.

October — Wemple, MFA, read his work in the home of famed poet Emily Dickinson as part of the Amherst Poetry Festival in Massachusetts. Dickson’s home, which is now a museum, is the site of an annual festival. Wemple, the author of three poetry collections, was the final reader of the day on Oct. 3, on the main stage of the festival.

June — Wemple, MFA, has a poem entitled “Nickel Rides” in the current issue of Heart online, a literary journal devoted to social justice issues. Wemple’s poem is about the recent Baltimore riots. Wemple is the author of three poetry collections.

May — Wemple, MFA, has a poem published in the May edition “A Poetry Congeries,” an online journal. Wemple’s poem is entitled “Beauty Operators.” Wemple is the author of three poetry collections. Wemple also presented a paper, “The River and Race: How the Susquehanna Defines Me,” at the Northeast Modern Language Association conference in Toronto. Session panelists (Remixing Ethnicity, Place, and Creative Writing) discussed influences on their creative work.

April — Wemple, MFA, received the Susquehanna Valley Reading Council’s “Literacy Award” for 2015. The council is comprised of teachers of reading from the elementary to college level. Wemple often promotes work by regional writers in his courses and other venues such as Bloomsburg University’s Big Dog Reading Series. At the Council’s spring meeting, held in Lewisburg, he gave a presentation on how poetry by local writers can be used to engage students. A regional native, Wemple is the author of three poetry collections and several essays that often focus on the Susquehanna Valley, as well as co-editor of an anthology of poetry about Pennsylvania.

November — Wemple, MFA, was featured in the book, So Far…So Close, and the accompanying photo exhibit presented by Albright College, Reading. The book consists of interviews, photographs and excerpt of the writings of 10 Pennsylvania authors and 10 authors from Tarapacá in northern Chile. The goal of the book is to overcome distance and language and demonstrate that although the world is large, its inhabitants do not live far apart.

September — Wemple, MFA, had poems recently published in two journals. Wemple’s poem “Frederick Douglass Learns to Read” was published in a special edition of Route Nine, the journal of the University of Massachusetts MFA Program for Poets and Writers. The journal solicited work from alumni to celebrate the program’s fiftieth anniversary. Wemple’s poem “Tapies” appears in ROPES 2014, a journal produced at the University of Ireland in Galway.

July — Wemple, MFA, has a poem in the new anthology The Gulf Stream: Poems of the Gulf Coast (Snake Nation Press). The book includes work from 51 poets of the Gulf region. Although a Pennsylvania native, Wemple spent part of his youth in southwest Florida. His poem in the anthology is entitled “Half a Mile Off Everglades City, Florida.”

April — Wemple, MFA, recently had The Artemas Poems, a series of linked, narrative poems, published by Finishing Line Press. It is Wemple’s third poetry collection. He commissioned Erik Kile, then a senior Creative Writing and Art Studio major, to do the cover drawing.

October — Wemple, MFA, has a creative nonfiction essay in the fall issue of Hamilton Stone Review, an online journal. His essay, “The True and Complete Story of Orange,” can be found online. Wemple is the author of three poetry collections, including “The Artemas Poems,” forthcoming for Finishing Line Press.

The Hamilton Stone Review is part of a movement of small, independent publishers and publications dedicated to distributing high quality fiction, poetry, and creative nonfiction. The review intends to encourage writers, whether unpublished or established, by bringing their work to readers by way of this online literary magazine.

August — Wemple, MFA, was among 10 writers interviewed and photographed by Hernán Pereira, an English professor and professional photographer at Arturo Prat University in Iquique, Chile. The book, “English Language Classrooms in Chile,” will also include a group of Chilean writers and will be published this fall with a grant from the Chilean Ministry of Culture, then distributed at no cost to intermediate and advanced English students in Chile. Wemple is the author of two poetry collections, and his poetry and prose have appeared in numerous journals and anthologies.

July — Wemple, MFA, has four new poems in the recent issue of the literary journal “Fledgling Rag.” The work is from “The Artemas Poems,” a series that is part of a manuscript-in-progress. Wemple is the author of two poetry collections, and co-editor of the anthology “Common Wealth: Contemporary Poets on Pennsylvania.” Wemple's poetry, creative nonfiction and reviews have appeared in numerous journals and anthologies.

June — Wemple, MFA, gave poetry readings on June 19 at the Hamilton Arts Collective in Baltimore and on June 20 at York Arts in York, Pa. Wemple, who has authored two poetry collections, also chaired a panel at the Northeast Modern Language Association Convention in Boston earlier this year. The panel, "Writing the Region: Readings from Writers Rooted in Place," consisted of five publishing authors discussing how a sense of place influences their work.

October — Wemple, MFA, was a featured reader at the recent Third Annual Stillwater Poetry festival. The festival included several nationally known poets, as well has jazz and acoustic music. Wemple is the author to two collections of poetry.

March — Wemple, MFA, is editor of "Watershed: The Journal of the Susquehanna," a 72-page interdisciplinary journal focused on the tri-state Susquehanna River region, that recently debuted. Megan Angstadt, a junior English: Creative Writing/Mass Communication major from Middleburg, serves at the managing editor. The journal includes nonfiction articles, short fiction, and poetry by established and newer writers, as well as photography. The journal was funded by a grant from the Degenstein Foundation.

June — Wemple, MFA, gave a poetry reading as part of the summer solstice celebration at Shikellamy State Park overlook on June 21. The event, sponsored by the Friends of Shikellamy State Park, included music, speakers, and other activities. Wemple was also featured in an article about the event published in The Daily Item. Wemple, who grew up in the region, is the author of two poetry collections, co-editor of a collection of poetry about Pennsylvania, and editor of a regional journal.

October — Wemple, MFA,, and English Department adjunct faculty Richard Kahn and Kevin Clark, have poems in the current issue of the literary journal "The Same." Wemple is the author of two published poetry collections. Works by Kahn and Clark have been published in numerous journals.