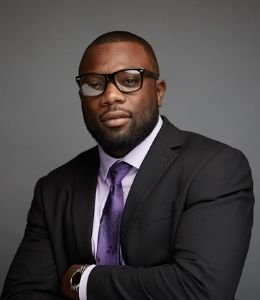 Lamar Oglesby began his career as a research administrator in 2012 as a Grant Analyst at Temple University. Over the course of 6 ½ years, he established himself as a leader in the finance and research areas of the university, receiving over 4 promotions during that short period of time. Mr. Oglesby was recruited by Rutgers, The State University of New Jersey in 2018 to manage their extensive research portfolio of more than $800 in research expenditures (2020). Mr. Oglesby now manages the 2nd largest office in the Office for Research and received his second promotion in the three years he’s been with the institution.

When not in the office, Lamar and his wife, Dominika, are very involved with the BU community. The couple established the Lamar and Dominika Oglesby Scholarship to provide financial support and mentoring to students of color with similar backgrounds. The couple also serves their community by organizing clean-up efforts in their neighborhood, feeding the homeless, and supporting black-owned businesses, particularly those of their fellow Bloomsburg Alumni.

Mr. Oglesby loves to spend his spare time with his family. Lamar and his wife love to spend their spare time experiencing live music, great food, and comedy., and nurture their children's fondness for the outdoors through the parks, watersheds, and wildlife reserves of Philadelphia and the neighboring counties.