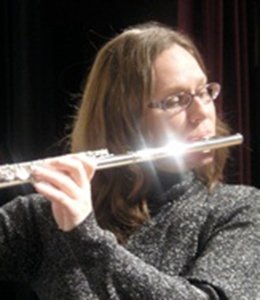 Tracey Schmidt-Jaynes is an associate professor at Bloomsburg University of Pennsylvania, where she teaches flute, music theory, and aural skills. Previous teaching positions include Vanderbilt University, University of Northern Arizona, and the University of Colorado-Boulder. She received the Doctor of Musical Arts degree in flute performance and pedagogy from the University of Colorado-Boulder, a master’s degree in flute performance from Northwestern State University of Louisiana, and bachelor degrees in flute performance and music theory/composition from the University of North Texas. Solo flute performances have included the National Flute Association convention in Chicago, as well as flute society festivals in Louisiana, Texas, Mississippi, Alabama, Tennessee, Arizona, Colorado, and Pennsylvania. Recent presentations include a lecture at the 2015 Penn State Flute Day and a lecture at the 2013 National Flute Association convention in New Orleans. She has adjudicated numerous competitions including the National Flute Association’s “High School Soloists Competition,” and served for many years as the Chair of the Young Artist Competition for the MidSouth Flute Society.