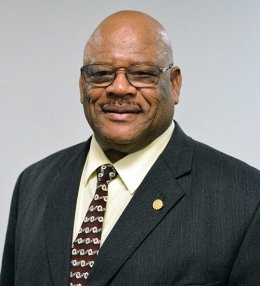 Currently professor of politics and public administration in Bloomsburg's department of political science, Dr. Agbango served as chair of that department for five years. He also served as chair of the mass communications department at Bloomsburg for one year. He was the Interim Dear of the College of Liberal Arts from January 2006 to June 2007. Prior to coming to Bloomsburg University in 1990, Agbango taught at Clark Atlanta University and at Spelman College, both in Atlanta. He was also director of international student services and programs at Morris Brown College, Atlanta.

Dr. Agbango is a native of Ghana, West Africa, where he was managing director of Zebango Trading Enterprise and a school teacher. In 1979, he was elected a Member of Parliament of the Ghana National Assembly for the Zebilla constituency. In this capacity, he rose to the position of the first deputy majority chief whip and deputy chairman of the Parliamentary Foreign Affairs Committee.

In 1981, Dr. Agbango was Ghana's accredited delegate to the 36th session of the United Nations General Assembly. That same year, he led a Ghanaian delegation to the Soviet-African Conference on "Peace and Social Progress" in Moscow, USSR Following political instability in Ghana, Agbango left Africa in 1983 to pursue advance studies in the United States. He holds a doctor of philosophy degree in political science from Clark Atlanta University, Atlanta, and master's of public administration degree from Atlanta University.

The Impact of Political Instability on the Economic Development Policies of Ghana (1960-1980) and Its Implications for Sub-Saharan Africa. Ph.D. Dissertation (Clark Atlanta University, July, 1991).