In just the past three years, more than twenty BU grads have served with City Year...

Dawn Lastowka isn’t a BU alum.  But, for as close a relationship as she has with BU and its students, she may as well be.

Lastowka is a Recruitment Director for City Year, an education organization and a member of the AmeriCorps national service network. She started recruiting with City Year Philadelphia in 2012 after six years with the organization and noticed that many students at PASSHE schools were from the Philadelphia area.  Her husband, Ken, himself a PASSHE grad from BU, was heavily engaged with his alma mater and gave Lastowka some extra insight.

“Between the student demographic at BU and Ken’s involvement, I saw a unique opportunity to grow City Year’s relationship with Bloomsburg, recalled Lastowka.

City Year has 3000 AmeriCorps members in 29 cities across the country whose job is to ensure students in systemically under-resourced schools receive a high-quality education that prepares them to thrive and contribute to their community. Lastowka says that many of the individuals who elect to serve have a strong desire to participate in a cause greater than themselves.

Many of the students we meet want to grow professionally through a unique experience. They may have had City Year in their classrooms growing up or were a part of an afterschool program and want to give back.”
~ Dawn Lastowka

Lastowka says her team looks for three things when considering a new hire: a growth mindset that is solution-oriented, adaptability, and an ability to build relationships across cultures.

“We need people who will take action to understand and empathize with people across cultures, hold themselves accountable, and build relationships,” emphasized Lastowka. “Cultural empathy is a huge part of the work that we do, and as an organization, it’s essential.”

Lastowka says that a term with City Year provides a space for those who want to work with youth outside of teaching to gain professional skills and experience.  Those who have degrees in Psychology, Counseling, Social Work, and Political Science and desire to work toward educational equity find the position attractive and rewarding. An education award for corps members who complete their term is also an attractive benefit to paying down debt or applying to graduate or law school.

“New grads can spend time working with schools and immersing themselves in the education sector, exploring where their passion lies,” explained Lastowka. “Those who are thinking about grad school find a place to explore the professional world before making that commitment.”

Lastowka says that as she suspected, Bloom grads are very well suited to the work. She has led City Year to make an intentional effort to recruit at BU through meeting with professors and student organizations and participating in career development opportunities such as the Career Intensive Boot Camp. In the past three years, more than twenty BU grads have served with City Year, and, despite the COVID-19 pandemic, corps members are still serving, and City Year is still hiring.

“It is an amazing experience full of opportunities for professional and personal growth, said Brittney Goris, Team Leader at City Year Miami and BU alumna. "BU students become a domino alongside those who are fighting towards equitable education for all. It is a powerful movement to be a part of.”

“Students and schools that work with City Year report better academic outcomes than those who don’t,” concluded Lastowka. “BU grads can really have an impact here.” 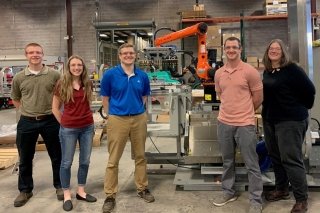 Dyco, Inc. has been a regular recruiter on the BU campus for many years. And as a representative of the company, Aaron Russell '14 now assists with bringing even more Huskies into the company fold. 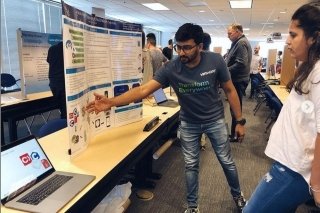 The notion that a student from a state university such as BU would never be noticed by as prominent a company has also changed. Through a shift in VMware’s recruitment strategy and utilization of his network, Digital Forensics/ITM major Charles Pearsall ‘20 became one of the first two BU Huskies to intern with the Palo Alto company. 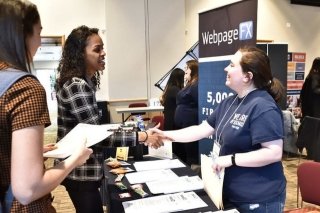 WebFX, a full-service digital marketing agency in Harrisburg, has a significant presence of Bloomsburg University alumni as its employees.