Not A Number: Alumni Couple Turns Struggle into Support

Hakeem Thomas and Coleen Schlager found each other on a dating site in the spring of 2013. They soon realized they had enrolled at the same university. That university was Bloomsburg.

Hakeem Thomas and Coleen Schlager found each other on a dating site in the spring of 2013. They soon realized they had enrolled at the same university. That university was Bloomsburg.

Messages turned into letters, which turned into Skype chats. The two met in July before moving to campus in August; Coleen as a Psychology major and Hakeem doubling in digital forensics and criminal justice.

As a first-generation college student, Coleen’s lack of experience on how to navigate campus life was amplified by an undecided career path. Hakeem’s transition included physical and emotional trauma from a recent military deployment. He wasn’t ready for that first year, and his dismal GPA eventually resulted in an academic dismissal from the university and added feelings of failure to an already heavy load.

"I hated being home, knowing my military team was still overseas. The guilt destroyed me, and then I was dismissed," says Hakeem. "In the military, we are ‘mission first,’ and I had failed my mission as a college student." 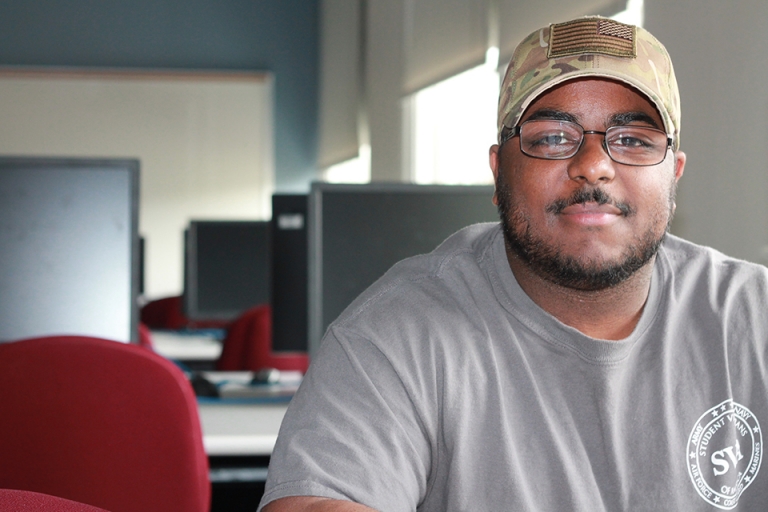 The feelings of guilt, failure, and uncertainty led Hakeem to take his own life. Fortunately, a call from Coleen interrupted the potential tragedy. A few days later, Hakeem met with Bob Heckrote ’12/’15M, academic adviser and supervisor for the Office of Military and Veterans Resources, for help with being reinstated.

“Bob understood what I was going through and believed in me,” says Hakeem. “He went door-to-door until faculty and administrators agreed to give me a second chance.”

After Hakeem was reinstated, he and Coleen began concentrating on more than grades, and the pair became involved in student organizations that met their personal and professional interests. Coleen led the Aging Special Interest Group (ASIG) and created basic computer classes for community members. Hakeem and other ASIG members provided technical assistance. 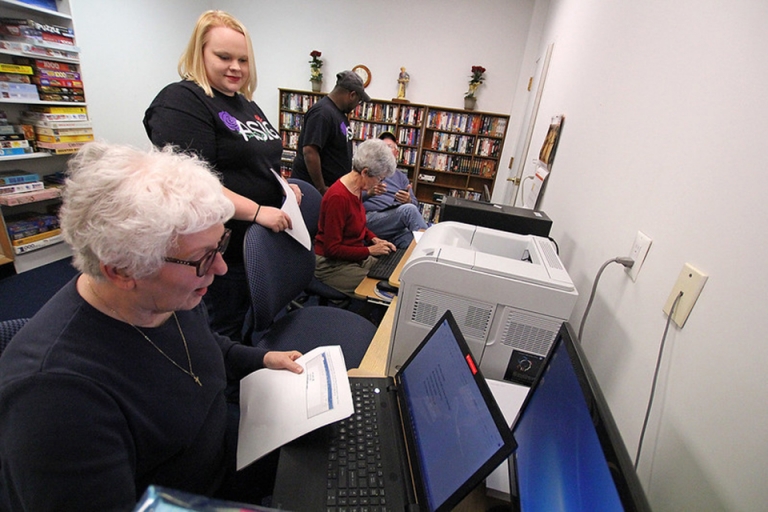 It was a wonderful learning experience for them, but it was also a great social event. Hakeem was able to use his technology background to facilitate an effective series of courses.” says Coleen.

“We showed them how to create Facebook pages to connect with family and use Word and Google for everyday things,” says Hakeem. “I taught a couple how to use facetime to talk to their grandkids. The pure joy in each class made it one of the greatest things I’ve done.”

Coleen cites her involvement with ASIG by instilling a more confident career direction.

“The experience reinforced my confidence in choosing psychology as a major because my primary goal is to help people and develop their skills/abilities,” says Coleen. “We  made it our goal to maximize our involvement with organizations.”

Hakeem connected on campus as president of the Bloomsburg University Student Veterans Association (BUSVA) and turned his pain into passion by raising money for suicide prevention with the Veterans Suicide Walk. Each November, BUSVA continues the tradition Hakeem started in 2015 by walking 23 laps around the academic quad; one lap for each of the U.S. veterans that commit suicide every day.

“BUSVA, ASIG, and volunteering played a huge role in why I’m not one of those 23,” says Hakeem. 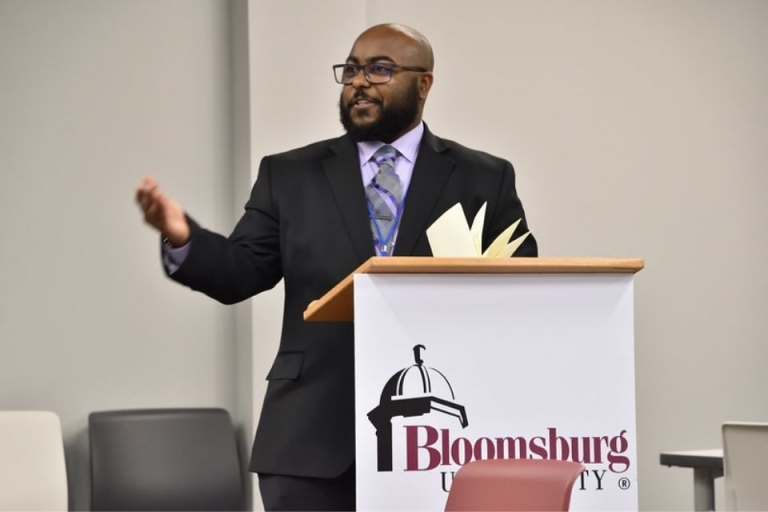 Hakeem’s visit to the office of Alumni and Professional Engagement (A&PE) for a resume review was another turning point . The A&PE staff convinced both to attend the Career Intensive Boot Camp (CIBC), a weekend program that provides last-minute preparation for the transition from student to professional.

“Those meetings helped me mentally as well as professionally,” recalled Hakeem. “I learned how to network and how to eat a meal in front of coworkers. It was a real transition to the professional world.”

“We both needed professional guidance,” says Coleen. “I had a lot of difficulty with interviewing and networking, and the CIBC wrapped all of those experiences into one. It was outstanding for developing my confidence in professional settings.”

The contacts Hakeem made at CIBC led him to the annual Student Veterans of America Conference in Anaheim, Calif., where he was offered an internship with Northrop Grumman Corp. He received a Professional Experience Grant (PEG) to fund his move to California and was offered a remote position while completing his degree. Hakeem declined the full-time offer that followed in favor of a job with the Department of Defense Emergency Notification System. He now manages the alert systems at U.S. military installations worldwide.

After graduating, Coleen and Hakeem Thomas married in September 2018. Coleen is now pursuing a master’s degree in industrial and organizational psychology. The practical applications of BU’s psychology program have allowed her to explore her career options and continue to be successful.

“My professors have strongly impacted my motivation and drive,” says Coleen. “The mentorship I experienced has made me highly successful and confident. I couldn’t be more grateful.”

Drawing inspiration from their struggles as students, Hakeem and Coleen remain involved, volunteering virtually and financially supporting students via the CIBC, BUSVA, and the Veterans Suicide Walk. 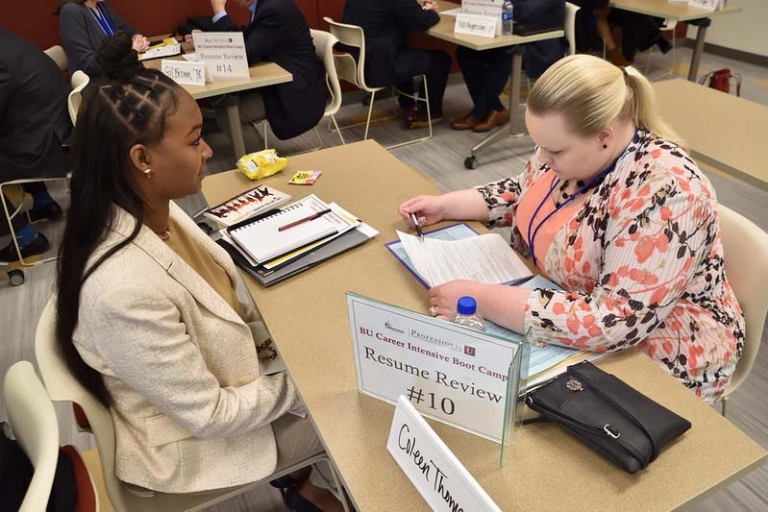 And despite their busy schedules, they both made the trip back to campus in the fall of 2019 for the 10th event celebration of the CIBC, volunteering as in-person resume reviewers and alumni panelists.

“I wanted students to have the same experience that I did,” says Coleen. “We now have the opportunity to be a positive influence on students.”

“At the last CIBC, I met some amazing students whose personal journey rocked me at my core,” says Hakeem. “I took the challenge of helping them work through and channel it to reach their goals. ” 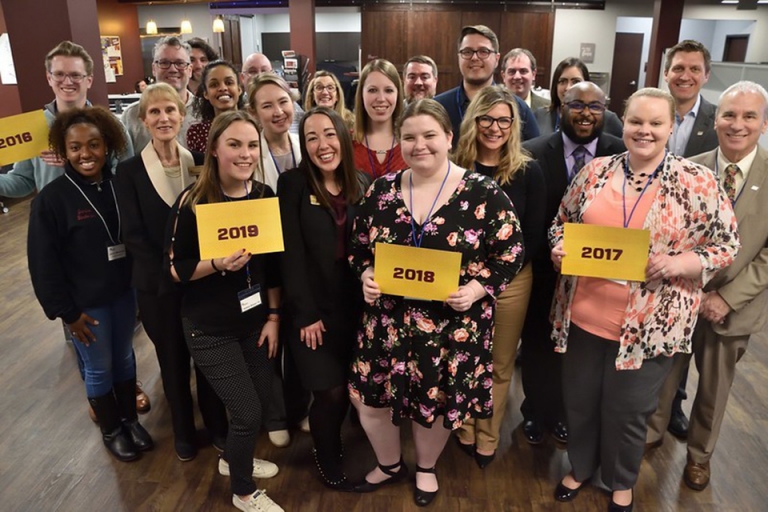 Boot Camp, BUSVA, and other student events and organizations like it at BU, thrive on alumni providing an edge to fellow Huskies and people like Coleen and Hakeem make it possible. There have been over 250 unique CIBC volunteers since February 2016, and more than 30 of them were participants as students. To help defray the cost to students, the program has benefitted by over $20k in corporate and individual sponsorships since 2016.

“If not for my professors and the boot camp, I wouldn’t be here,” says Hakeem. “My wife, volunteering, and my work keep me from going back to the dark place. It will be a process, but I’m all in.” 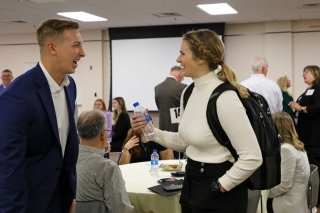 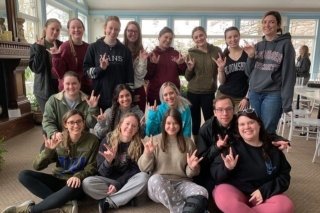 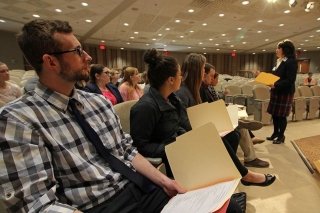